It was organized by the Masters in Urban Anthropology, Migrations and Social Intervention on December 15th in the Catalonia campus. The coordination was in charge of the teacher Joan Josep Pujadas and had diverse presentations around experiences and investigations related to the models, imaginaries and dystopias on the contemporary metropolis. The event was attended by students, professors and people interested in critically reflecting on the phenomena, that mark contemporary metropolitan life, from disciplinary perspectives with architecture, anthropology, art and audiovisual communication.

The cultural association Künstainer and the Department of Anthropology, Philosophy and Social Work organized on November 19 and 20th these meeting in the west neighborhood of Bonavista (Tarragona), to stimulate and reflect on immigration and citizen cooperation from the associative networks of the neighborhood. It was performed in the neighborhood's Rambla. Saturday, 19,  was dedicated to the active associations, through the presentation, by a group of students of the master in Urban Anthropology and Social Intervention of the URV, of the results of a social research done, within the framework of two subjects of the previous course. There were also proposals for intervention to improve the tasks of local associations: Topromi, Racing FC Bonavista, 27.7 Artgroup, and the association of neighbors, all present at the event. The second day approached the migration experiences and integration of various groups, with the presence of members of the Arab Association of Students of the URV, the Islamic Association of Bonavista and the Association of Moroccan Women in the neighborhood of Campclar. Every day around 60 people have participated in the activities, which have taken advantage of this activity as a meeting point towards the improvement of integration and cooperation within the neighborhood.

It was organized by the Medical Anthropology Research Center of the URV and Famacèutics Mundi with the collaboration of the Department of Anthropology, Philosophy and Social Work. On November 15 and 16 at the Catalonia campus, specialists were gathered on the processes related to access to medicines. The Colloquium has been considered as a space to discuss academically aspects related to culture and medicines, due to the relevance that they currently have; and thus to try to understand the processes related to the difficulties for equitable access of medicines and, consequently, to health. It has had more than fifty participants and has been organized in two sessions (morning and afternoon), each with five presentations and a final discussion of conclusions. Controversial issues have been dealt with, such as the relationship between expert knowledge and personal experiences about the disease, commercial arguments that promote vitamins and constituents for children, antibiotic consumption in Spain, or conflicts and resistance around vaccines.

On November 14th, at the Catalunya campus, an academic session was organized, accompanied by colleagues and friends, to pay homage to Josep M. Comelles, a professor of Social Anthropology - now retired and professor emeritus. Students, their fellow professors from the Department of Anthropology, Philosophy and Social Work and other university, nursing and communication professors, as well as medical professionals have participated. Four round tables have been held linked to topics close to the work of the teacher and researcher during his professional career: visual anthropology, ethnographic video, medical anthropology, the intersections of anthropology and the Tarragona school. Finally some testimonies of men and women who have not been able to personally attend the event, were shared.

The URV, through the Social Work degree, together with the group of social workers of the health area of ​​the districts of Tarragona and Tierras del Ebro, organized on November 11th, the Coference dedicated to social work as a key piece in Health. The call has been well received, reflected with the participation of more than 300 professionals from all over Catalonia, interested in taking full advantage of this opportunity to meet and rethink themselves as a key collective in health. Has taken place in the Auditorium Diputación de Tarragona. The inaugural conference "The Social Work in Health: Increasing the efficiency of the system through the efficiency of the people" has been in charge of  Dolores Colón, a graduate in Social Work, scientific director of the master's degree in Social Health Work (UOC) and associate professor of Degree of Social Work (UB). She is director of the magazine "Agathos, health care and welfare". 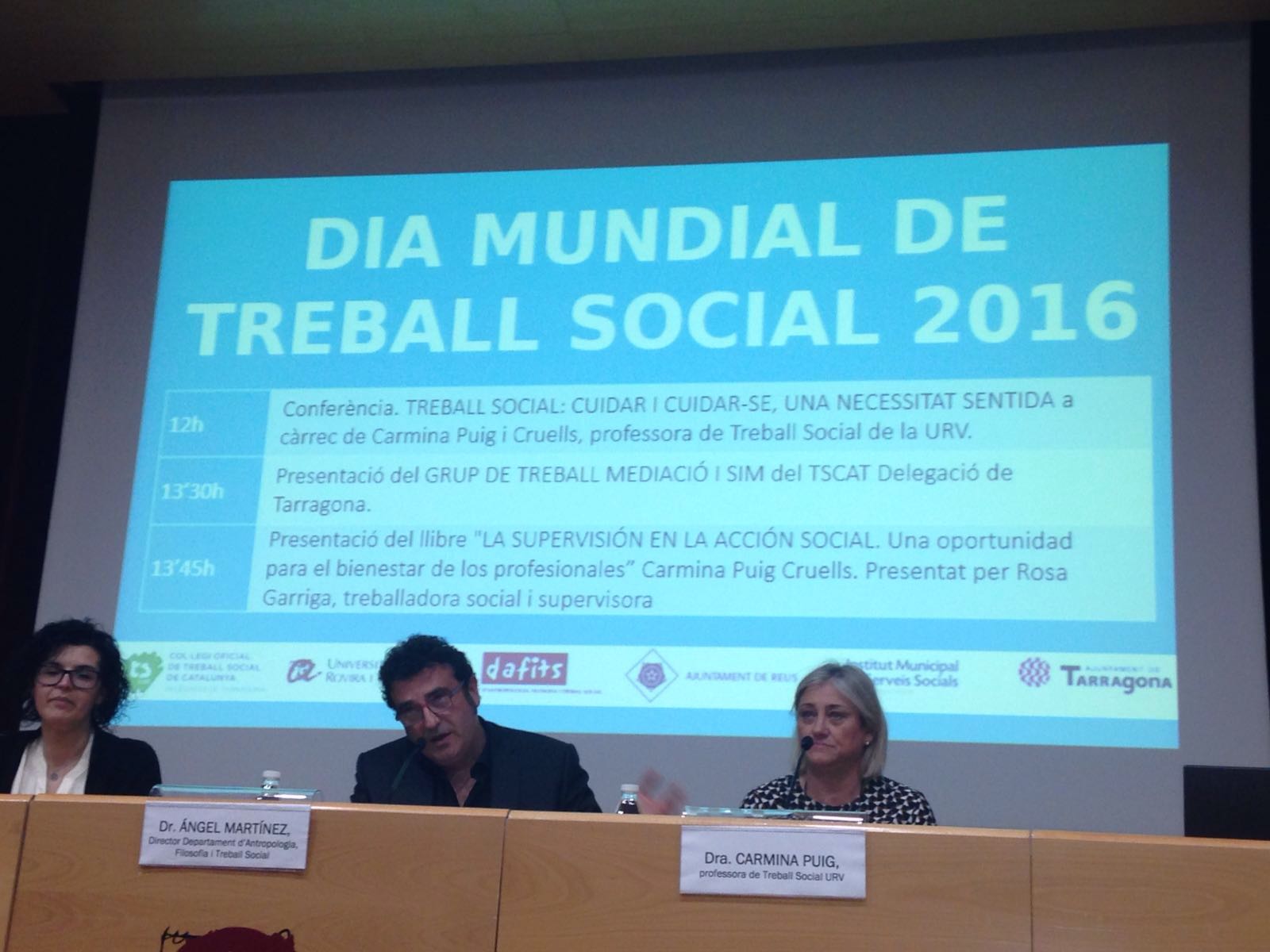 On April 14th, the Faculty of Legal Sciences of the Rovira y Virgili University, Municipal Institute of Social Services of Tarragona City Council, Reus Town Council, Delegation of Tarragona of the Official College of Social Work of Catalonia and the Department of Anthropology, Philosophy and Social Work organized a conference dedicated to commemorate the World Day of Social Work. The inaugural conference was entitled "Social Work: Caring for and caring for yourself, a felt need" and was in charge of Carmina Puig and Cruells, Professor of Social Work of the URV. Then was  presented the Mediation and SIM Working Group of the TSCAT Delegation of Tarragona. Finally Rosa Garriga (social worker and supervisor) presented the book "Supervision in social action, an opportunity for the well-being of professionals" by Dr. Carmina Puig Cruells. In the Conference has participated teachers and professionals of social work of the province of Tarragona and more than 100 students. 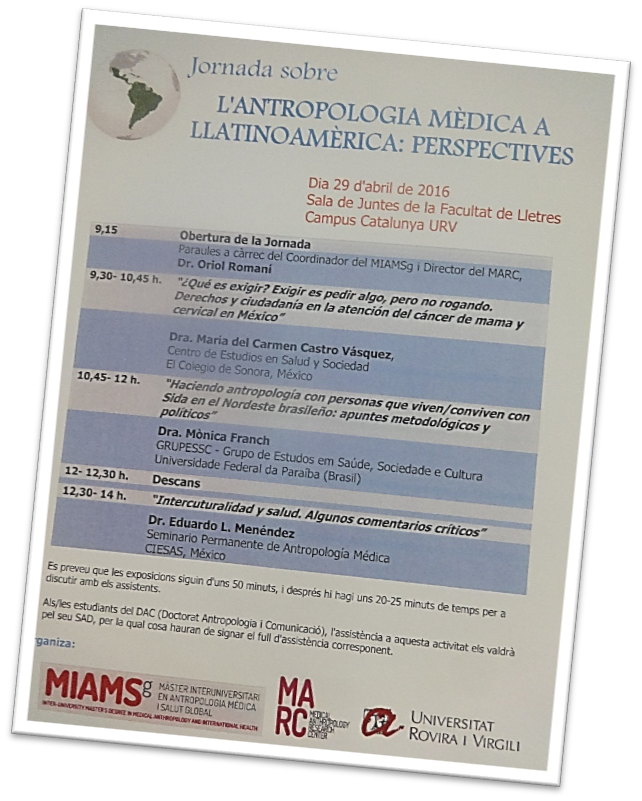 On April 29th  in the Meeting Room of the Faculty of Letters of the Campus Catalunya of the URV, was held with the Conference with three international speakers. The first lecture entitled "What is to demand?" Demand is to ask for something, but not begging. Rights and citizenship in the care of breast and cervical cancer in Mexico", was in charge of Maria del Carmen Castro Vásquez  (Ph.D) of the Center for Studies In Health and Society of the School of Sonora, Mexico. The second was in charge of Mónica Franch (Ph.D) of the Group of Studies on Health, Society and Culture of the Federal University of Paraíba (Brazil) and was titled "Making Anthropology with People Living /Coexisting with AIDS in the Brazilian Northeast: methodological and political notes." The last one was given by Eduardo Menéndez (Ph.D) of the Permanent Seminary of Medical Anthropology, CIESAS, Mexico and discussed on Interculturality and health. 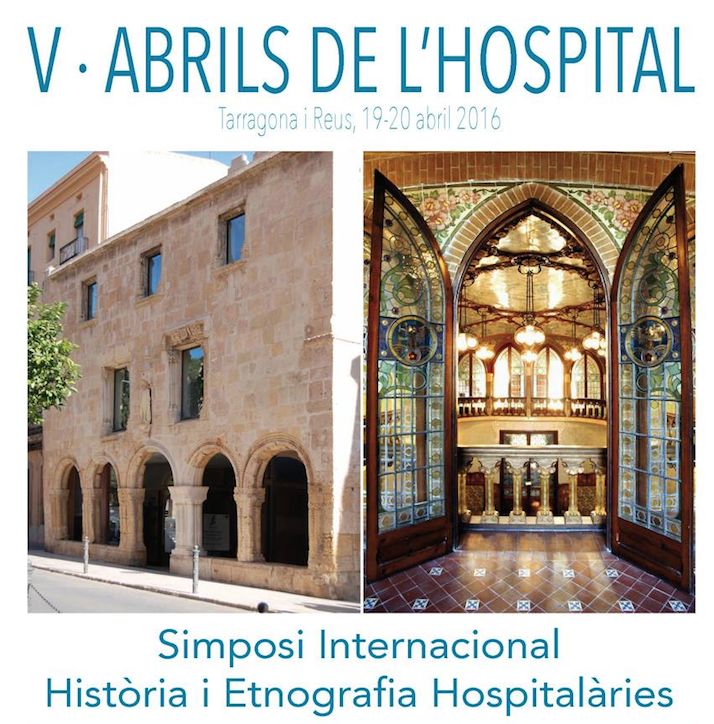 On February 19th was held the International Symposium on history and ethnography hospital in the Boardroom of Catalonia Campus of the URV. It was organized around three blocks of discussion and debate: one refers to the enhancement of documentary heritage, urban and artistic hospitals and their media profile, a second about the phenomenon of asylum moral and evolution towards custodialismo and was presented as a phenomenon characteristic of the nineteenthcentury to the crisis in the second half of the twentieth century and, thirdly, the approach to the study of hospitals from a dual perspective: a historiographical and the ethnographic as a way to find areas of competition between the two looks that open the possibility of capturing reality impossible to discern in other scenarios. The activity was organized by the Institute for Medieval Cultures (IRCVM) and Medical Anthropology Research Center of the URV (MARC) in collaboration with the Institut Pere Mata, PhD in Anthropology and Communication URV (DAFiTS), the Master of medical Anthropology and global health (URV-UB-IMF / CSIC) and the Masters in Medieval Cultures of the UB.